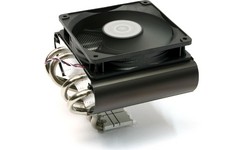 Because of the shape of the cooler, the large fins directly above the core, installation on the LGA 775 socket is tough, at best. The manual only covers basic installation, such as removing the bottom sticker and applying thermal paste, then attaching the four pegs to the motherboard.

After much cursing and some minor wounds, I finally realized that using only finger to install the HOC-9000 isn’t happening. I finally pulled out a small wrench, turned it sideways so that the shaft of the wrench was against the top of a peg and pushed down on that. Once I did that, installation wasn’t too bad.

This heatsink is HUGE. Be sure to consider layout of your case before purchasing this cooler. The OCZ Reaper DDR2 memory modules in the test system had to be moved over from the slot closest to the CPU. This is important to keep in mind for those who have memory modules with large cooling devices.

Also, the heatpipes have a wicked bend to them. At the apex of their bend, they come very close to the fan on the top of the Antec P180 test system.

The area directly around the CPU is very small, however, so installation on motherboards with limited space around the CPU socket shouldn’t have any issue with this cooler.

To eliminate noise due to fan vibration, the fan is mounted to the heatsink using rubber mounts.

The Nexus HOC-9000 was installed using Noctua NT-H1 thermal compound. The stock Intel cooler was also installed using the NT-H1 compound. Arctic Silver ArctiClean stages 1 and 2 were used to prepare both the CPU surface as well as the coolers. Orthos was used to stress the CPU for 15 minutes, followed by 10 minutes of idle time. Thermal management was disabled as was CPU fan control, meaning that both CPU cooler fans were running at 100% during thermal testing.

The Nexus HOC-9000 cooler is a very large cooler that has some innovative features. Unfortunately, it also has some major flaws that make it hard to recommend. The rather poor cooling performance along with the large size of the cooler are glaring issues. However, the noise produced by the HOC-9000 was much more than acceptable.