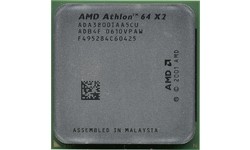 The number for the AM2 socket is ADA3800CUBOX (ADA3800IAA5CU returns to this number on the AMD site).

Please correct the information. I was searching for a 939 chip and this listing came up because the model number used in it is for the 939 socket, not the AM2 socket.

You can delete this post after the correction has been made if you choose to do so.

Need a character counter so we know when we have typed 1,000 characters. Guess I'll keep adding until it's enough.Maybe 1,000 characters is just too much. Not everone has that much to say about a product. Or maybe just trying to correct an error like I am. Do spaces count as characters? Still have to type more. I'm too lazy to actually count the characters so I'll keep trying after typing so much more; figure sooner or later it'll be enough.Thought that would be it, but still have keep on typing. Should have given up before, but now I've typed so much just might as well do it so this will post. Maybe should lower it to 500 characters, 1,000 is really seeming like a lot right now. Maybe it'll be enough this time.