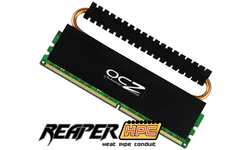 A very good overclocker. FSB of 1600 + if you have a good motherboard.

Stable from the first installation. Was detected as 1066 by my motherboard (Gigabyte GA-EP35-DS3R). Lowered it to 800 so as enable very high overclocks by playingwith the CPU multiplier on the motherboard.

Due to the heat pipes around it, I guess that is why they don't get hot as much even after 8 hours of playing a game like Crysis. I was still able to touch the RAM for 10 seconds and not get burnt