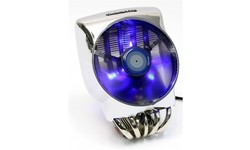 Cools my Intel Core 2 Quad Q6600 running at 3.609 (my default setup). The temperature never gets above 50 degrees celcius.

I am yet to see the any core of the CPU reach 70 degrees .

One of the easiest fans you can ever install, at least on an LGA 775 motherboard.

Installation isn't a problem as much as size or type of case. If you don't have a big case, please avoid as this thing is HUGE. The shape of the fan

One of the sexiest fans I have ever seen.

The blue LED makes it look even cooler especially when it is spinning at maximum speed.

I was surprised that it wasn't very noisy at maximum speed. My previous fan, Sharkoon silent eagle, would be heard when the fan starts spinning at full speed. This one is constantly on full speed at all times and I barely hear it.

I Love this Fan